Not all crystalline admixtures are the same

The corrosion of reinforcing steel has been a growing concern for structures due to the increase in occurrences and the costs of repairs. So how can you know which product is best to do the job of protecting your steel from corroding?

To answer this question, a long-term independent field exposure study was conducted by the University of Hawaii to evaluate the durability of reinforced concrete specimens exposed to an aggressive marine environment. Twenty-five test panels made of concrete and reinforced with steel were exposed to the aggressive, warm salt waters in the tidal zone at Pier 38 in Honolulu Harbour for a period of 9—10 years from 2002 to 2012. This study represents one of the longest continual test periods ever carried out in the world for corrosion of reinforced concrete. 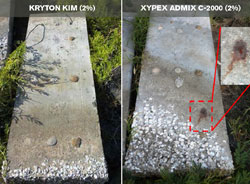 In addition to control specimens, the panels included various corrosion inhibiting admixtures and pozzolans intended to reduce the chloride penetration rates through the concrete and delay the onset of chloride induced corrosion of the reinforcing steel. During exposure, the panels were monitored for half-cell potential, chloride concentrations, cracking and visible signs of corrosion. 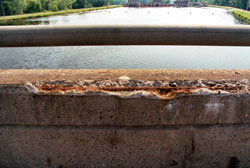 The key findings in the reports are as follows:

Calcium nitrite based corrosion inhibitors delayed the onset of corrosion at a dose of 20 L/m³, but did not provide reliable protection at a lower dose of 10 L/m³. These admixtures were not effective at reducing the ingress of chlorides. 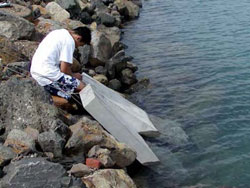 Pozzolans (15% fly ash and 5% silica fume) combined with a reduced water-cement ratio (0.36 compared to other samples batched at 0.40) performed well, although poor dispersion of the silica fume compromised the ance of at least one panel. Control panels (no admixture or Pozzolan) with a water-cement ratio of 0.40 experienced corrosion—induced cracking and rust residue.

Installation of panels at Honolulu Harbour Long-term exposure testing is the most accurate form of testing, because the exposure simulates the actual service conditions of a real structure. Laboratory tests are generally short term, and are designed to provide accelerated results using conditions that do not always model real life.

As this study suggests, Kryton Krystol Internal Membrane (KIM) admixture differs from other single-function admixtures and supplementary cementitious materials. The combination of reducing the permeability of the concrete, reducing shrinkage cracking, and improving the self-sealing properties can increase the resistance of concrete to the penetration of harmful chemical agents. It is concluded that KIM can prevent corrosion in reinforced concrete by impeding the development corrosive conditions.

The overall result is a structure with increased durability, a longer lifespan and lower maintenance costs over the structures service life.